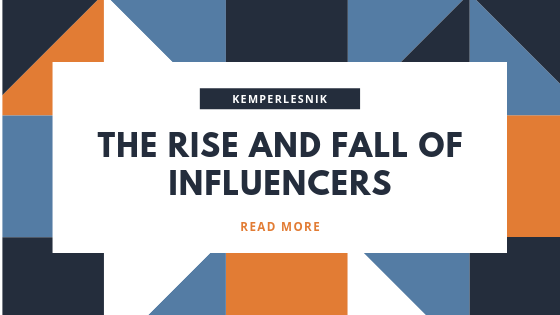 The Rise and Fall of Influencers

As the media landscape changed, we marketers sought new ways to inform, engage and persuade our audiences. We saw the rising influence of individuals on social media and jumped in with both feet to capitalize on this influence for the benefit of our brands. We worked with celebrities and athletes to tout our products on their social channels and saw immediate increases in demand.

While highly recognized individuals became influencers, so did many average Joes. People who truly just love to cook, those who naturally like to explore the outdoors, those moms of multiples and the ones who have always had an eye for fashion. So, in a true opportunistic fashion that is a hallmark of a good marketer, we jumped on it. We began engaging with “influencers” all over the place. People with followings large and small who were active on social media.

Our reach expanded from sea to shining sea and among people with as few as thousands of followers to those with millions. We utilized these people to promote, promote, promote! The one thing we didn’t pay that much attention to, however, were those watching and following our army of so-called influencers. These consumers got into the game by simply being curious and voyeuristic. They wanted to see what Kylie Jenner was wearing and to know how one’s teeth could be so white. At first, they bought into the influencers’ recommendations, ideas and promotions.

But then, we got greedy. We added offers and deals. We started programming robotic and inauthentic content like, “I just love this {INSERT NAME HERE} product, and anyone who uses {INSERT PROMO CODE HERE} will get a discount. You’ll love it too!”

Then, boom, it hit them (meaning, those humble followers on social media – read: consumers). These “influencers” are just trying to make a buck! These people are just shamelessly promoting products so that they can get paid. They don’t really love that curling iron. They aren’t really using that amazing new kitchen tool five times a day. They can’t possibly have such an addiction to new shoes that it requires that much footwear. We’ve been duped!

And thus, the lowly consumer wised up. They stopped listening. The invasion of inauthentic marketing in what started out as genuine passion sharing ruined the influencer.

Today, very few consumers pay attention to the promoted products served up by influencers. Even fewer rush out to buy those products. Many brands have stopped investing in influencers. And many people with large followings refuse to get paid for social posting. The party is over.

Now, don’t get me wrong, there will always be a place for influencers in the world. So long as people have aspirations, we will watch others and mimic the ones we aspire to be. That’s human nature. We marketers will just have to find a new way to reach them – authentically – because the influencer as a marketing tool is dead.