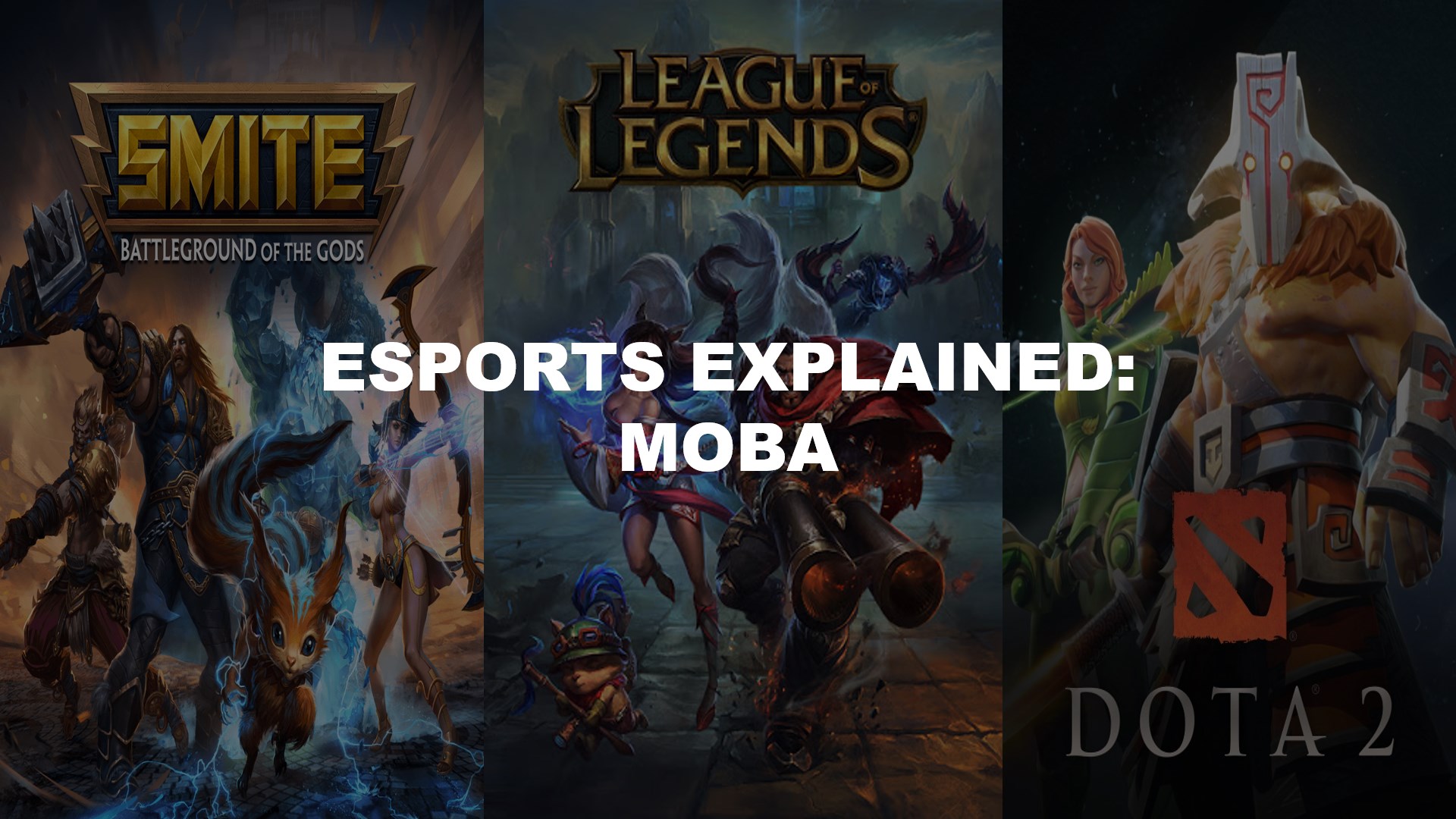 In this new series by KemperLesnik, we will be exploring and defining popular esports terms. This article focuses on a genre of esports, MOBA, also known as Massive Online Battle Arena.

What is a MOBA?

A MOBA, or Massive Online Battle Arena, typically puts a team of five players against another. Generally played on PC, MOBAs have the ultimate goal of destroying the enemy base. Players must work together to acquire items and territory using unique characters, each with their own advantages and weaknesses. Throughout the game players level up their characters by defeating minions (controlled by AI) and their opponents, acquiring both gold and experience. Gold is used to buy items, which provide stat boosts and unique abilities. Some of the most popular MOBAs include League of Legends, DotA 2 and Smite.

The first well known MOBA was released in 2003, as a fan made mod (short for modification) for the game Warcraft III. This mod became known as Defense of the Ancients (DotA), with many iterations to follow, most notably Defense of the Ancients Allstars, simplified to DotA. DotA grew quickly and was featured in some of the earliest esports tournaments, dating back to 2005. The mod was maintained by community volunteers, some of whom notably left to join Riot Games to develop League of Legends, today’s most popular MOBA. Game developer Valve acquired the intellectual property rights to the game in 2009, and released DotA 2 in 2013.

The world’s most popular esport, League of Legends, was released in 2009 by Santa Monica based Riot Games. In the game’s ten year long history, the game has evolved from seventeen playable characters, known as champions, to a roster of 148 today. Riot has long been an innovator in esports, filling up arenas from the Staples Center to the Bird’s Nest in Beijing. There are franchised competitions all over the world, from the LCS in North America, to China, Korea, Europe and minor leagues in South America, Turkey, Japan and more.

The LCS, the franchised league for competition in North America, features ten teams competing in a Spring and Summer Split. The top three teams from the Summer Split go on to compete at World’s, the annual championship pitting the best teams from all over the world against each other. FunPlus Phoenix, a Chinese team, won World’s 2019, beating a pool of twenty four top teams. The most notable franchises within the LCS are major organizations in American esports, such as Cloud 9, Dignitas TSM, Team Liquid, Evil Geniuses and 100 Thieves.

The LCS Spring Split Playoffs are set to begin this coming weekend, with quarterfinals matches consisting of (w,x,y,z.) Cloud 9, the favorite to win Spring Split, has been absolutely dominant this split, winning seventeen out of eighteen regular split matches. Most notably, Team Liquid, North America’s best performing team these past two years, failed to qualify for playoffs, despite two world champions on their roster. Click here to see the LCS schedule.

Released in 2013 by Valve, DotA 2 is the successor to the original DotA, the first MOBA to gain large popularity. Although League of Legends is more popular today, DotA 2 has noticeably large prize pools for its annual championship, known as The International. Last year’s event was held at the Mercedes-Benz Arena in Shanghai, with a prize pool exceeding $34 million. This is done by letting fans contribute directly to the pot with the purchase of a battle pass known as “The Compendium,” which rewards players with ingame currency and more for watching and competing in special challenges.

The competitive circuit for DotA is much more fragmented, as developer Valve takes a more open circuit approach to its esports competitions. Certain events throughout the year are designated as “majors” and “minors” with prize money and circuit points being awarded to top performing teams of each event. Teams that perform well throughout the year are invited to compete in The International, along with regional qualifiers. Eighteen teams competed in last year’s championship, which was won by European OG.

ESL One Los Angeles, which was set to be held live in Los Angeles, has transitioned to an online format due to current circumstances. Online matches are currently being held for China, North America, South America and Southeast Asia, with the winning team taking home between $40,000 and $55,000. Click here to see ESL’s schedule.

Released on PC in 2014 by Georgia based Hi-Rez Studios, Smite fields playable characters from mythology, such as Thor or Zeus. Unique in the MOBA space, Smite also features a “first person” camera, similar to what a player might see in a game such as Call of Duty. This is different from League of Legends or DotA 2, where the camera is “above” the action. Further separating Smite apart is the fact that the game can be played on consoles such as XBOX, PlayStation or the Nintendo Switch, which neither League of Legends or DotA features, though a variation of League of Legends for mobile and consoles is currently in the works.

Smite features two world championships each year, one for console play and one for its PC league. The Smite Pro League (SPL), which features the top eight Smite PC teams, competes the entire year, with their performance determining where they seed during the annual championship. The finals are held each year in Atlanta, with a prize pool of $1 million.