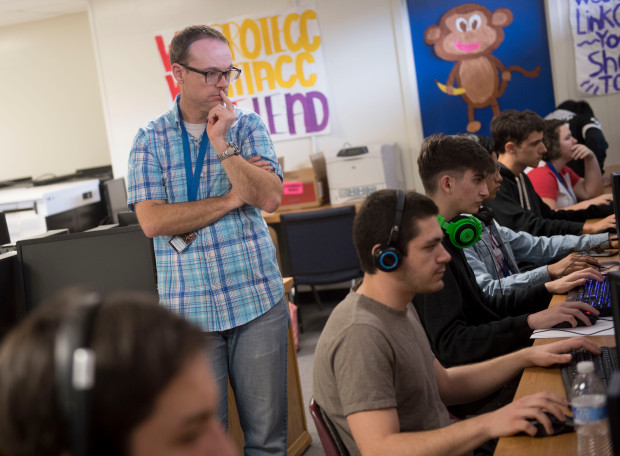 High School Esports – The Next Frontier

Across the country, high schools are starting esports programs, where just like traditional sports, students will form teams, develop strategies and compete against other schools locally or digitally. Practice may occur in a computer lab if there is school support, or completely online. Teams even have coaches, drawing further parallels between traditional sports and esports.

The benefits of high school esports are the same as any other extracurricular – a sense of community, teamwork skills and leadership. Unique to esports are the participants themselves. Many esports clubs have kids that wouldn’t normally participate in after school programs. By providing these students with a sense of community, a way to compete and build teamwork, schools can build engagement with an often neglected part of the student body.

Esports also offer high school students a path to higher education. Chicago’s own Robert Morris University was the first in the nation to offer esports scholarships back in 2014. Now, colleges and universities across the country are also getting involved in esports, offering $15 million in esports scholarships in 2019. College esports athletes enjoy competing and representing their schools, with top competitors earning additional scholarship money as well. In 2020, the first place League of Legends team will earn $10,000 per player in scholarship prizes.

While offering similar benefits to other extracurriculars, high school esports faces its own set of challenges. The largest issue for high school when introducing esports is deciding what games students will play and compete on. Many of the most popular esports, such as Fortnite, Overwatch and CSGO, use firearms. Wanting to avoid violent topics in schools,educators have banned such games from being part of their esports programs. This leads to a restriction of titles for students to compete on. League of Legends, the world’s largest esport, and Rocket League are two of the most common high school titles because of this.

However, violence is not the only issue with game selection. As for-profit  companies with intellectual property, video game publishers have final say over who is allowed to compete and profit from competitions featuring their titles. Professional tournament organizers, such as ESL or Estars Studios, and high school-specific organizers such as PlayVS and Interscholastic Esports, must secure a license from the game publisher in order to offer that game to their participating schools. These licenses typically come with a large price tag and just because an organizer has secured a competitive license for one year doesn’t guarantee the developer will provide the license again.

Costs also keep schools away from investing in esports. Initial setup costs can be hard for districts to justify when quality PC gaming setups are at least $800 a station. Additional costs from electricity and IT support can quickly pile up, in addition to fees from tournament organizers. With schools already spending large sums on more popular programs like football, which can range from $11,000 to $133,000 annually, it can be hard to justify the return on an esports program.

Another challenge for students interested in starting an esports program is that often school administrators are unfamiliar with esports as a concept, which is understandable given the novelty of esports. The games are complicated and far harder to understand than football or basketball. The technology demands are also daunting. Platforms like Discord and Twitch are commonplace in esports but confusing to the uninitiated. All of these moving, unfamiliar parts can ultimately intimidate districts from starting a program.

Demand for talent is growing at both the collegiate and professional levels of esports. Half of the players in the LCS, North America’s professional League of Legends league, are foreign – and there would likely be more were there not rules in place to prevent teams from fielding all foreign rosters. Despite importing so many players, the LCS has struggled to compete consistently on the international stage, leading many to question whether an investment into training domestic talent would be more valuable.

With so many imports and older players, as well as a drought of rookie talent, LCS teams will need to start recruiting players with experience from the high school and collegiate levels. Colleges and other bodies have begun to host combines, similar to the NBA, to determine the best high school esports talent. Some will receive scholarships, with others being recruited straight to the pros. Thanks to the digital nature of esports, data can be immediately stored and tracked as these players compete, letting students from anywhere in the country prove their worth to talent scouts. Riot Games has started an annual “Scouting Grounds” for their teams to recruit top, unsigned talent.

As the world of esports grows, so too will it grow in academic settings. The benefits of socializing a normally disengaged group are enormous. Many students who feel that their interests are ignored by their schools will soon enter a world many of us are familiar with – the world of sports and competition. Sports provide students with a community, teamwork skills and opportunities to be leaders, not to mention potential scholarships. Schools may struggle to implement esports into their curricula in the short term, but someday, we may see no distinction between sports and esports when it comes to high school athletics.