Fall Guys and Among Us Explained

This article covers two of the hottest games on Twitch, Fall Guys and Among Us. We dig into what these games are and what it means for Twitch viewership.

What is Fall Guys?

Created by UK based studio Mediatonic, Fall Guys has turned the gaming world upside down. Released in early August 2020, the game has already amassed more than 80 million hours of content watched on Twitch. Already a commercial success, the game has sold over 7 million copies on Steam and is the most downloaded PlayStation Plus game of all time. 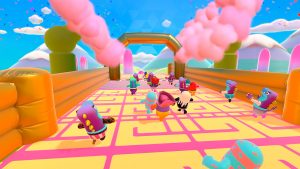 Fall Guys can be best explained as Ninja Warrior meets Fortnite. Fall Guys takes sixty competitors through a series of courses, similar to what one would find on a game show like Wipeout! or Ninja Warrior. The top performers move on each round, until there is one player left standing.

Available on both PC and PlayStation, Fall Guys offers organized chaos. The game is designed to combine luck and skill in such a way to make no two rounds alike. Out of twenty-four courses, no round of Fall Guys features more than six. Some courses involve racing to the finish line, others require teamwork to move giant balls across the map. All have guaranteed silliness.

What is Among Us?

Based off of games such as Mafia or Werewolf, Among Us takes place in deep space. A crew of ten players cohabitate one of three maps. Players are either unsuspecting crew members or devious impostors. Crew members must survive until the final round and find the impostors; impostors must sabotage the mission and stay hidden.

Unlike Fall Guys, however, the game was not an overnight success. Among Us was released on June 15, 2018 by indie studio InnerSloth. The game was available on both iOS and Android, but not PC, which is where the game now dominates. On release, the game wasn’t seeing more than 50 players at a time.

Despite the lack of immediate success, the three-person development team continued releasing updates for the game, sometimes as often as once a week. Gradually, streamers started paying attention to the game. Korean streamers noticed it in 2019, followed by a few Brazilian streamers. In an interview with Kotaku, Programmer and Business Lead Forest Willard shared:

“We stuck with Among Us a lot longer than we probably should have from a pure business standpoint,” said Willard. “We tried to quit and should have quit several times.”

Among Us, which struggled to crack more than 50 concurrent players, now sees upwards of 110,000 players at any given time.

What Does This Mean for Twitch?

Twitch, and live streaming in general, has gained massive attention in 2020. In March and April of 2020, live streaming grew 45% YoY. More entertainers, athletes, and celebrities have turned to Twitch than ever before to connect with their fans. Much like social media, live streaming offers fans a chance to feel more connected with their idols. The audience can comment and interact with one another, and the streamer, in real time.

The rise of Fall Guys and Among Us reflects a greater trend on Twitch, the growth of content beyond gaming. While esports is the main thing people think of when they hear Twitch, top games like League of Legends and Fortnite were down in July. However, Just Chatting, the Twitch category featuring no game play of any kind, grew to 176 million hours watched in July, up from 166 million in June.

The appeal of Just Chatting lies in the personalities of the streamers. Unlike esports, which is driven by high stakes competition and quality game play, motivation for watching individual streamers is far different. A streamer’s ability to make jokes and keep the audience engaged makes for a quality stream, and this is supplemented by narrative driven content.

Fall Guys and Among Us lend themselves to storytelling. Rounds are easily narrated as we all know when the game ends – when there’s only one person or faction left. The streamer is either the last person standing, or on the victorious side of the space expedition, in the case of Among Us. There’s natural progression that’s easily digestible, and augmented by silly jokes. In win and in loss, the games are fun to play and watch.

Rounds of Fall Guys and Among Us are also far shorter than a game like League of Legends – which can last upwards of 40 minutes. A long, drawn out League of Legends slug fest can be exciting when it’s ten world class players giving it all. However, a 40 minute League of Legends match plagued by poor decisions and shoddy teammates leaves a bad taste in everyone’s mouth – both the streamer and their audience.

Games like Fall Guys and Among Us demonstrate the future of Twitch. Fast, fun game play that quickly changes pace and progression creates easy to narrate, digestible games. The easier to follow and commentate on, the likelier it is for a game to grow. Game developers will continue to tailor how they develop games to make them more streamer accessible. Streamers serve as both a marketing and retention lever for games, making them an important part of the marketing mix.