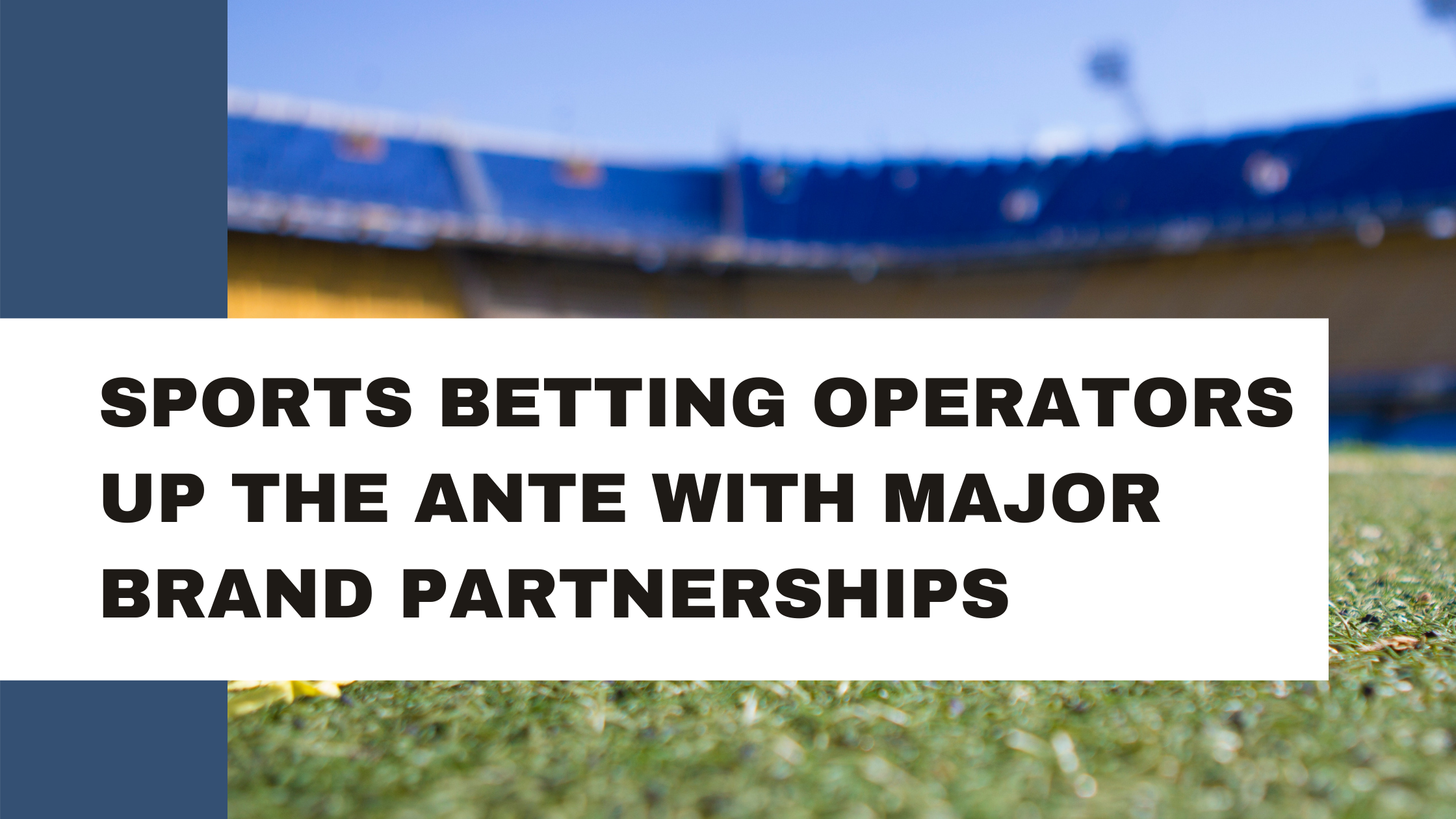 Sports Betting Operators Up the Ante with Major Brand Partnerships

Since the repeal of the Professional and Amateur Sports Protection Act (PASPA) in 2018, the sports industry’s sentiment towards wagering on sporting events has taken a major pivot, opening up opportunities for sponsorships and advertising to sports betting operators. Organizations that would typically avoid any association with gambling have now embraced the industry after seeing the immense value that betting operators can provide.

The betting companies themselves also see the significant value that can be attained through partnerships. Whether it’s through sponsorship assets or content, sports betting operators are doing whatever they can to speed up growth and acquire new users. Industry experts estimate that the customer acquisition cost for a sportsbook is somewhere between $350-$500. While that number may seem high, the lifetime value of a customer in this industry is expected to exceed $2,500, making long-term loyalty well worth the investment.

With the goal to be the primary sportsbook for avid bettors, here are a few of the strategic partnerships, acquisitions, and investments top operators have made in the industry.

The DraftKings team has had a busy year, capped off by the company’s recent acquisition of the Vegas Sports Information Network (VSiN). The latest merger between a media company and a sports betting operator, the deal will enhance DraftKings content offerings and reduce the cost of acquiring new customers through vertical integration between the network and the DraftKings betting platform.

A deal with WWE was recently announced to position DraftKings as the company’s “Official Gaming Partner.” While initially focusing solely on free-to-play contests, the deal will provide DraftKings exposure to one of the largest and most passionate fan bases in all of sports, while also offering exclusive media assets and content collaboration opportunities.

Other DraftKings partnerships include deals with DISH Network, ESPN, Bleacher Report, MLB, UFC, NASCAR, Madison Square Garden, and the Staples Center. And while it isn’t technically a sports betting deal, the company also has an NFL partnership that makes it the “Official Daily Fantasy Sports Partner of the National Football League.”

FanDuel is owned by Flutter Entertainment plc, a British holding company created by the merger of two sports wagering companies Betfair and Paddy Power. At the league level, the FanDuel Group has signed partnerships with the NBA, WNBA, MLB, and NHL, with the latter also providing the rights to live-stream two games on the FanDuel Sportsbook platform.

Penn National Gaming made waves in the sports betting marketplace when the company spent $136 million to acquire a 36% stake in Barstool Sports, which led to the eventual launch of the Barstool Sportsbook. Though still early, it appears that the acquisition was a smart move, as the Barstool Sportsbook was able to capture 23.9% of the market in Michigan, the first state where it was able to launch alongside the other market leaders. Barstool’s content and talented roster of creators provides Penn a customer acquisition cost that is significantly lower than its competitors in the industry, which could be a key factor in sustaining profitability.

Along with the talent already at Barstool, the Barstool Sportsbook has also partnered with creators outside of the organization. One example is Twitch streamer Nick “Nickmercs” Kolcheff, who is a professional esports athlete for the FaZe Clan. Nickmercs has worked with Barstool before, but this partnership is one of the first collaborations we’ve seen between esports and the sports betting industry. As sportsbooks continue to get creative with their partnerships, you can be sure that Penn and Barstool will continue to try things that have never been done before.

PointsBet, an Australian sports betting company with a U.S. headquarters in Denver, has made strides in the U.S. market through a combination of local and national partnerships. At the league level, PointsBet has partnered with the NBA, NHL, and PGA Tour. The NHL deal was especially notable, as the league agreed to accept an equity stake in the betting operator in exchange for an array of sponsorship and promotional opportunities across all linear, digital, and social platforms.

In local markets, PointsBet has signed deals with several professional teams, including the Chicago Bears, Indiana Pacers, Indianapolis Colts, and Kroenke Sports & Entertainment, the owner of the Denver Nuggets and Colorado Avalanche. The most significant local partnership signed by PointsBet was the agreement with the University of Colorado Boulder, the first for a major Division-I Athletics Program.

PointsBet also secured a five-year deal with NBCUniversal, becoming the official sports betting partner of NBC Sports. The deal, which provided NBC with a 4.9% equity stake in exchange for $393 million of marketing value, is another example of how sportsbooks and media outlets can create mutually beneficial partnerships that seamlessly integrate into existing broadcasts.

BetMGM represents the sports betting platform of MGM Resorts International, one of the largest hotel and casino operators in the hospitality industry. Formed in a collaboration with British sports betting company Entain plc, BetMGM is currently available in 11 states and ranks third in overall market share.

One of the company’s most unique partnerships is the deal signed with Buffalo Wild Wings, which will allow customers in six states to find custom promotions and bet types while physically located in a Buffalo Wild Wings restaurant. BWW has also launched an in-bar channel called OT Odds, which is powered by BetMGM. The channel will show sports betting content like live odds and fantasy advice on select screens in participating locations. The restaurant hopes to expand these offerings to additional locations as sports betting continues to be legalized in more states.

Caesars and William Hill joined forces in 2020 when the former acquired the latter for approximately £2.9 billion, creating one of the largest gaming & entertainment companies in the world. Since the acquisition, the team has made a bevy of moves to position itself as a leader in the sports betting industry, including the signing of the first NFL team sponsorship in a historic deal with the Indianapolis Colts. In addition to that deal, Caesars also reached an agreement with the NFL to become the league’s first-ever “Official Casino Sponsor.” While the deal does not encompass sports betting, it positions the company to capitalize off of the league’s popularity and could lead to an expansion once the league decides to fully embrace sports betting.

Other deals that Caesars and William Hill have signed include a multi-year agreement with ESPN and a partnership with TV streaming provider fuboTV. Expect the announcements to keep coming, as it was recently reported that the New Orleans Saints are expected to sign a deal with Caesars that would make the company the naming rights sponsor of the Superdome for the next two decades. This would mark the first time that a sports betting operator holds the naming rights to a professional stadium in the United States.