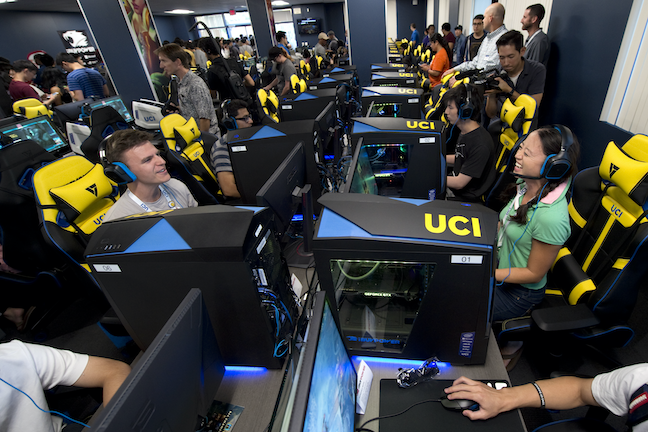 Following our last piece on collegiate esports, we wanted to dive deeper into some of the best college esports programs. Though no two schools are alike we found that all schools had the following in common.

We cover four of the leading esports colleges in the country and why they succeed.

UC Irvine is often the first school that comes to mind when it comes to college esports, and is the first esports program at a public university. The hallmark of UCI’s esports program is its arena, one of the largest in the country. The 3,500 square foot facility features 72 high end gaming PCs, as well as a full broadcasting station. UC Irvine also offers boot camps in League of Legends and Overwatch.

UCI’s esports program currently offers scholarships in League of Legends, Overwatch and Super Smash Bros Ultimate. The League of Legends team is incredibly competitive, placing in the top four in 2019 and winning the championship in 2018. The UCI Anteaters’ Overwatch team placed in the top 16 last year, and though there is no official collegiate circuit for Smash, UCI’s Smash players are also very competitive.

On top of its competitive esports program, UCI and its founder, Mark Deppe, are behind the North Atlantic Scholastic Esports Federation (NASEF.) A nonprofit, NASEF’s goal is to help bring esports curriculum to schools across the continent. UCI also offers an Esports Management program, designed for professionals looking to get better educated about esports.

Located just 22 miles from downtown St. Louis sits Maryville University. The program is headed by Daniel Clerke, who is also the General Manager of EUnited, a leading esports organization. Clerke had additional esports experience prior to joining the Maryville Saints, having founded Enemy Esports, which competed in the LCS. His coaching staff includes a former coach of LCS team Golden Guardians, as well as an alumni from Maryville’s dominating League of Legends team.

Maryville currently offers scholarships for varsity students competing in League of Legends and Overwatch. Both of these teams are some of the most prominent in the nation. Maryville’s League of Legends squad has placed first in Riot’s official collegiate competition in three of the past four years. Not to be outdone by its sister squad, the Overwatch team placed in the top four in last year’s Overwatch Collegiate Championship. Maryville also offers club teams in CSGO, Hearthstone, Rainbow Six Siege and Rocket League.

Chicago’s very own Robert Morris University was the first university to bring esports under its athletic department, dating back to 2014. Since then, RMU has expanded into multiple titles, currently fielding a roster of 50 players under their varsity program. These games include League of Legends, Overwatch, Super Smash Bros Ultimate, CSGO, Rocket League and Fortnite. Their League of Legends team won the 2020 Midwest Conference and placed 3-4 in the 2017 League of Legends Collegiate Championship. Read more about why we’re confident in Chicago’s esports scene here.

Located in the capital of Pennsylvania, Harrisburg University of Science and Technology offers no varsity sports, but excels in esports. The program is headed by Chad Smeltz, better known in the League of Legends community as “History Teacher.” Smeltz is a high school teacher turned esports general manager, having worked for LCS teams Immortals and P1. Returning to education, Smeltz leads Harrisburg’s esports program with a dual focus on education and professionalism. HU’s League of Legends coach is Alex “Xpecial” Chu, known as one of the leaders of both TSM and Team Liquid.

Are you interested in starting an esports program at your school? Comments or questions? Reach out!