In this series by KemperLesnik, we will be exploring and defining popular esports terms and games. This article covers Rainbow Six Siege, an esports title quickly climbing the ranks of esports fandom. For an overview of the esports ecosystem, start here.

Rainbow Six Siege, developed by Ubisoft, has quietly become a leading esports title. Released in December 2015, the game has seen investments from leading esports organizations like TSM, Luminosity Gaming and Evil Geniuses. In a recent report from The Esports Observer, Rainbow Six Siege was placed in the first tier of esports, based on metrics such as viewership and number of players, reaching the same level as League of Legends and CSGO. 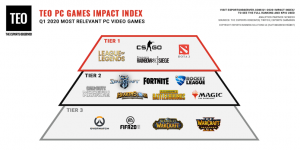 How to Play Rainbow Six Siege

Rainbow Six Siege is a First Person Shooter (FPS) playable on PC, PlayStation 4 and XBOX One. Players compete in multiple game modes, such as rescuing a hostage, defusing a bomb or securing an area designated area. Teams of five attack or defend, while choosing from 54 different characters, called operators. The strategy within operator selection has drawn comparison to MOBA titles like League of Legends and DOTA 2, which also have numerous characters to choose from.

A unique feature of Rainbow Six, in comparison to other notable FPS titles like CSGO or Call of Duty, is in the use of terrain. Namely, that the terrain is destructible. Players can destroy terrain throughout the match, devising new ways to enter a building or gain the edge in a shootout. The game features a Mature rating, similar to CSGO and Call of Duty.

The first esports competition for Rainbow Six was organized by Ubisoft and held only five months after the game’s release, in May 2016. Competitors battled on both PC and Xbox One for a $100,000 split between consoles. In its most recent competition, held in February 2020, $3 million was on the line, with Spacestation Gaming taking home $1 million for first prize.

The steady growth of Rainbow Six as an esport can be attributed to Che Chou, Ubisoft’s senior director of esports. Taking a more grassroots approach to the game, Chou emphasized investing in its community as the game became more popular. As opposed to the franchise system used by OWL and LCS, where teams have permanent membership, Rainbow Six featured promotion and relegation in its competitive leagues. The top-performing amateur teams had a shot at knocking out low-performing professional teams. As Chou puts it:

“We allow challenger teams to work hard and fight their way into the system. New blood cycling into the system is vital for it. It’s vital to keep the grassroots going and players aspiring to reach the next level.”

This focus on sustaining a player base and community clearly paid off. Since the game’s release, the game has maintained sustained growth on Twitch. On average, Rainbow Six’s Twitch viewership grows 6% every month. Its peak viewership was at the most recent championship in February with over 17 million hours of content watched. Though viewership is not a complete metric for analyzing a game’s popularity, the game recently passed 55 million registered players. 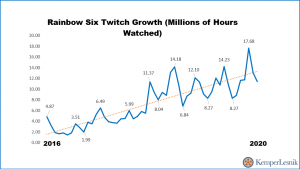 Capitalizing on this steady growth, Ubisoft recently announced an update on its esports scene. A total revamp, the North American Pro League has been split into American and Canadian divisions. US teams will compete offline in a Las Vegas studio LAN environment. This brings an extra layer of professionalism to the game, as all teams will live in Las Vegas and travel to a centralized location to compete. Featuring world champions Spacestation Gaming, the American league will also include well-known organizations like TSM and EUnited.

Supplementing these American and Canadian leagues will be two Challenger Leagues. According to an official Ubisoft blog post, “T[t]he goal of this program is to ensure we grow a layer of talent that’s always on the verge of bursting into the pro tier.” Other professional leagues, such as the LCS and OWL, also field minor league teams. However, Rainbow Six will still feature promotion and relegation, meaning these Challenger teams have the potential to qualify for the big leagues. This is different than in the LCS and OWL, where these teams serve more as a farm for new players.

The Next Big Esport?

As Rainbow Six looks to make its next big leap as an esport, other FPS esports titles are also changing. Two new CSGO leagues, Flashpoint and ESL Pro League, were formed earlier this year. Valorant, the new FPS title from Riot Games, has gained massive Twitch viewership despite not yet being released. To succeed, Rainbow Six must continue to invest in its community. By letting new talent continue to emerge, the competitive scene remains fresh.

As brands continue to enter esports, violent FPS titles like Rainbow Six may struggle to attract sponsorship dollars. Wanting to avoid controversy, we believe that many brands will gravitate to safer titles such as League of Legends or Rocket League. As the Rainbow Six scene continues to professionalize, it will have to balance between appeasing new brand partners and remaining true to its community.

Have you played Rainbow Six? Are you interested in getting your brand involved? Sign up for our esports newsletter or reach out!