2019 has been quite the year for esports. From a record breaking prize pool of  $34 million for the Dota 2 International, the announcement of a Call of Duty franchised league and massive investments into esports companies around the world, esports continues to see massive growth. This year followed up on 2018’s breakout year of Fortnite, when Ninja became a household name thanks to streaming online with Drake, Travis Scott and more. People are more familiar with esports now than ever before, and are starting to take gaming celebrities seriously. Here’s a list of the top three esports trends of 2019, and where that will bring the industry in the new decade.

For decades, gaming has been seen as the activity of the antisocial. Stereotypes depict gamers as basement dwelling, junk food consuming, antisocial young men. The reality is that gaming is a cultural staple for the vast majority of today’s youth, not to mention vast swathes of older generations – the first Super Mario Bros was released in 1985. Gaming is increasingly part of everyone’s lives – all ages, genders and beliefs.

For the better part of a decade, esports organizations such as FaZe Clan and Optic Gaming have built content around their lives as gamers. Not only were these guys great gamers, they were also cool to be around. Young people across America idolized the likes of FaZe Banks and Hector Rodriguez, they were top players as well as great personalities. Supported by content that brought fans into an inner circle, these top gamers were emulated much like professional athletes. Imagine if Michael Jordan released vlogs every week when he was at the top of his game, discussing how he’s playing, his personal life and his favorite food, music and more.

FaZe Banks engages fans with stories from his life

This type of lifestyle content has started to build a culture of its own, with its own values, jokes and even fashion. Fans buy apparel from esports orgs and streamers to be part of something bigger, similar to how one buys merchandise at concerts or to support their favorite sports team. Much like how skateboarding was an underground phenomenon that eventually hit mainstream fashion (Vans, Supreme, Santa Cruz), 2019 has been the year of esports apparel drops. In five minutes, 100 Thieves sold $500,000 worth of clothing in an exclusive release. FaZe Clan’s New York pop up shop had to be shut down due to massive lines.

100 Thieves has taken apparel a step further. In July, the esports organization raised a $35 million Series B and announced it would be opening up a storefront in Los Angeles. The world of esports is hitting retail and traditional brands are taking notice. Sportswear brands such as Champion, Adidas and Nike have all released esports lines in partnership with esports teams and players. Not only available online, shoppers can find this esports influenced sports apparel across the country. League of Legends LCS jerseys are sold in Walmart. Being a gamer, formerly a taboo, is finally cool. 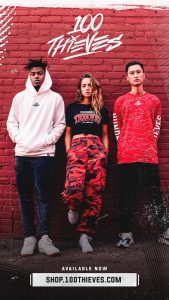 Tyler “Ninja” Blevins, the biggest household name in gaming, made waves in August when he announced he was leaving Amazon’s streaming platform Twitch for Microsoft’s Mixer. As one of Twitch’s top performers, Ninja made thousands a month from his subscribers (more on that here) and thousands more from deals with Red Bull and other sponsors.

Long the market leader, Twitch is the go-to platform for watching live gaming content, such as esports tournaments, but also streamers like Ninja and others. In Q2 2019, over 72% of livestreamed hours were watched on the platform, eclipsing YouTube, Facebook and Mixer. 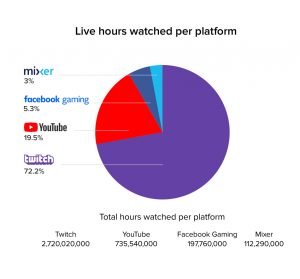 While Ninja’s departure to Mixer has not appeared to have made significant impact on Mixer’s viewership share, this hasn’t stopped platforms from signing streamers away from Twitch. Mixer has gone on to sign shroud and FaZe EwOk, YouTube has signed Courage and Facebook acquired both Mkleo and DisguisedToast. Protecting itself from bleeding more streamers, Twitch recently signed deals with top streamers already on Twitch, as well as signing away a few from other platforms. Similar to the “streaming wars” between Netflix, Disney and more, these platforms look to draw viewers by having the best content.

As we’ve written about previously, streamers serve as taste makers and influencers among the gaming community. If a streamer tries a new game out on stream, their audience may be more inclined to buy it. Similarly, if a streamer declares a game to be boring, or “not cool”, the game may be doomed to fade away into obscurity. Apex Legends notably used a streamer centered strategy to promote its release in early 2019 and was downloaded over 50 million times in its first month.

By using streamers to highlight new features of the platform, each company looks to differentiate itself in the streaming marketplace. In the future, we will likely see more integration between the platforms and their parent companies. Amazon will provide Twitch users with bonuses on Amazon Prime and for the games they develop. YouTube may integrate with Google Stadia and Facebook can offer support through Instagram, Whatsapp and Oculus VR. Microsoft, a longstanding member of the gaming community, can use Mixer to show off XBOX as well as exclusive games such as Halo, one of the largest franchises in gaming.

Now that gaming is officially cool, the mainstream media has started to cover the space with more depth. Multiple esports stars have appeared on The Tonight Show with Jimmy Fallon, including Ninja, Fortnite World Cup Winner Bugha and players from the San Francisco Shock, the winners of this year’s Overwatch League Finals. Dr. Disrespect also appeared on Jimmy Kimmel and the League of Legends World Championship was parodied on Saturday Night Live. Esports has also appeared on shows like Ballers, and esports television shows are currently in development. 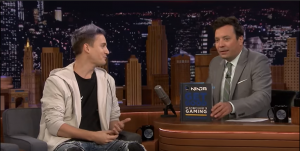 With this coverage comes a need to educate the mainstream about the space. One of the most common mistakes by the media is the use of “e-sports” or “eSports” when referring to esports. This has gone so far as shirts have been made mocking those that use these terms – it’s a telltale sign that someone isn’t familiar with esports. 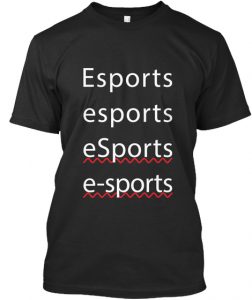 Because the space is so new, it’s often met with criticism when first encountered by mainstream journalists, particularly those from traditional sports. People will declare that esports “aren’t sports” and immediately dismiss an entire industry. An entire industry that is expected to reach $1 billion by the end of this year, and has taken plenty of investment from athletes like Michael Jordan and Rick Fox, as well as notable sports companies such as Kroenke Entertainment and the Kraft Group.

Over time, this misunderstanding of the industry will fade away. The lines between esports and the mainstream have already started to blur, as esports stars become celebrities, and celebrities try their hand at esports and streaming. Several rappers, including Lil Yachty, Post Malone and Offset have streamed themselves gaming. Football player Juju Smith Schuster reportedly earned $100,000 streaming himself watching a football game, and has appeared at Fortnite Pro-Am events. Gaming and esports will soon be viewed in the same light as film, music and sports, with those at the top as mainstream celebrities, not just personalities of the gaming world.

In 2020, we can expect gaming and esports stars to have a bigger influence on all things pop culture, be it apparel, food, movies and more. Celebrities, wanting to capture the same magic, will start streaming, with mixed success. Those that have always gamed, and know how to leverage the unique engagement that live streaming provides, will flourish and extend their personal brands. Those that stream but don’t take it seriously will flop and be seen as fake.

As we’ve covered previously, brands must be authentic to succeed in esports. Many brands have taken this to mean going all out with messaging claiming that they support gamers and always have. This approach often falls flat. The esports audience will quickly dismiss any brand that comes off as ingenuine. A better approach is that of Mastercard’s. By approaching esports the same way as it does traditional sports, Mastercard has successfully become an “uncool” esports brand. By focusing on its values and what those values mean to esports fans, Mastercard has gotten in on the ground floor of the next big thing in entertainment.